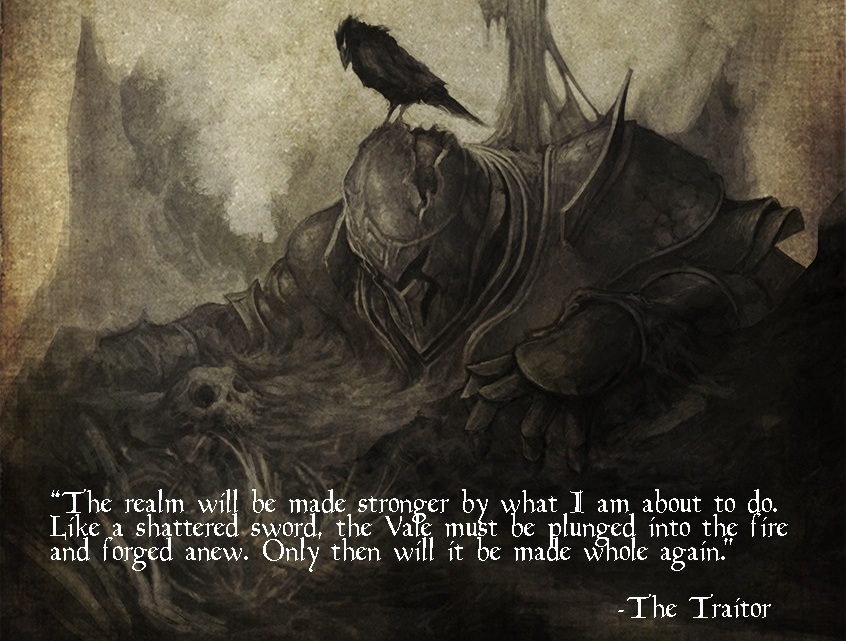 Sages would come to call this time the Era of Upheaval. Gods walked the Earth as mortals. The Tablets of Fate were shattered. And the destiny of men and gods alike were their own to make. It was a time of great heroes and terrible villains.

This is a tale of such heroes. Men willing to lay down their lives to protect a treasure most precious, freedom. In the troubled times to come, the deeds of such men would shape the realm greater than the hands of giants."

2. Wolves in the Woods
Anocumo travels through the Reaching Wood with a company of Zhents that are attacked by wolves and the Black Stag. The party finds Anocumo clinging to life after the battle and brings him to Redwater.

3. An Errand to Greythorn
The party couriers a message to Drey Guldrhein at Greythorn Tower for the Sheriff of Redwater.

4. A Legend Revealed
Drey tells the party the legend of Veymar Black. The party cleanses the ruin of Blackhill Motte.

5. Wanted
Ian learns that he is a warforged. The party escapes arrest by the Zhents.

6. Servant of the Great Wolf
The party rescues Kriger and Lynn Kodhammer from the Zhents and flee toward Hill’s Edge.

7. The Missing Priestess
Dorn learns that the priestess that summoned him to the Vale is missing. The lord of the city orders them to kill a hydra to absolve them for the “murders” in Redwater.

8. The Caves Under Hill’s Edge
The party tracks the beast to an abandoned mine and finds that the Zhents have secretly taken up residence there.

9. The Zhent Trap is Sprung
The party rescues the missing priestess and stops the hydra from rampaging through Hill’s Edge. They reveal a Zhent conspiracy to supply the Woeden with siege weapons and are knighted for their heroic deeds.

10. Stenjatten Bridge
The party fights a raiding party and slows the Woeden army by collapsing Stenjatten Bridge. They fall into the cold water of the River Reaching and lose consciousness.

11. Escape from the Goblin Warrens
The party is fished from the river by goblins and kept prisoner in their warren. They fight their way out and escape on the river in canoes.

12. Heroes of Blackhill Motte
A steel dragon flies overhead as the party travels through the Wildwood. They defends Lynn Kodhammer and a group of orphan children from a Woeden war party at Blackhill Motte.

13. Twice as Dumb! Four Times as Strong!! HOOT!!!
The party tracks the Woeden through the woods and find a nest of owlbears. Kaldur is given a trapped bottle by the assassin Lucas Gravenor which he carries to the court of Jarl Wyldehorn and is imprisoned when the trap goes off.

14. The Trial of Kaldur
Kaldur is sentenced to death. The party makes its way through the Underdark to free him.

15. Jailbreak!
The party (with Kaldur) flees Jarl Wyldehorn’s land and is attacked by Lucas Gravenor. They recover a scroll containing the Black Stag’s secret plan to free Balariax the dragon.

16. Knives in the Dark
The party is attacked by Lucas Gravenor and his Shadowhawk assassins. They defeat him and set off for the volcano Krakjelm.

17. The Fighting Pits of Scornubel
The party travels to Scornubel where they find a deranged Drey Guldrhein (who is a steel dragon but is now back in human form) witless and fighting in the pits as a gladiator. They learn that Salazzar, the leader of the Shadowhawks, is masquerading as a priest of Helm in Hill’s Edge.

18. Prophecies and Pilgrims
The party travels to Triel and hear prophecies from Elvar the Grainlord’s daughter. They encounter pilgrims fleeing orc raiders in the Forest of Wyrms.

19. The Skulltakers
The party rescues the pilgrims from the orcs and flee to a small abbey called Haven Hill. Kaldur finds his tribesmen the Crannblacks.

20. Deliverance at Haven Hill
Dorn executes the bishop at Haven Hill for torturing and killing Woeden. The party defends the Hill against the orc warband with the help of the Crannblacks.

22. Breaking the Siege
The party fights and kills the Black Stag and Balariax’s young, but not before Balariax flies out of her lair toward Hill’s Edge. The party finds Drey Guldrhein and uses the Horn of Veymar to cure him. They fly to Hill’s Edge and hold the gates against a horde of Woeden. Drey Guldrhein is mortally wounded fighting Balariax. The party defeats Balariax and the Woeden army flees. Drey tells them with his dying breath to destroy the horn, the fang and the claw – the three components of the Raiment of the Dragonking.

23. The Barons of the Woedland Wilds
The party is made barons by the king after the battle of Hill’s Edge. They go to Drey Guldrhein’s tower to find clues about the Raiment.

24. Death Comes in Threes
The party climbs to the top of Greythorn Tower and finds that the Fang is located in the Monastery of Ukisor and the Claw at Boareskyr Bridge. The Time of Troubles begins.

25. Evil in Ent Root
After several months of running their baronies in the Woedland Wilds the party has been summoned by the king to Iriaebor. In their travels they find the village of Ent Root has been plagued by a witch and they find her lair and kill her.

26. Toil and Trouble
As the party approaches Iriaebor they find the witch was not dead after all and assaults them with a demonic host at an inn outside the city.

27. Burning the Candle at Both Ends
The party arrives in Iriaebor and explores the Tower of the Mage’s Guild.

28. The Demon and Forge of War
The party finishes exploring the Tower of the Mage’s Guild. Ian learns much about his past and all learn a vital clue regarding the location of the Claw of Boareskyr.

29. The Grand Melee
Kaldur fights and wins the Grand Melee while Dorn absolves himself for executing the bishop. Petturi Oldharp poisons Dorn and steals the Horn of Veymar, bringing it to Semmemon in an abandoned temple.

30. The King’s Feast
The party attends the King’s Feast. Logan poisons Petturi, Ian gains a new cohort and Kaldur, newly minted member of the Griffon Guard, gets himself into trouble.

31. Murders in the Faceless Temple
The party searches for the stolen Horn of Veymar at the Temple of the Faceless, but the Shadowhawk assassins are already there and have killed all the Zhents, including Semmemon.

32. The Servants of Bhaal
The party escapes the Zhents and finds the lair of the Shadowhawk assassins; exploring its perilous depths in search of the missing horn. The party learns that King Liamund has gone missing.

33. There Will Be Blood
The party explores the Shadowhawk’s lair and finds that many of the assassins have been changed into vile undead. Ahbinav destroys one of the vampire lords with a blade of holy light.

34. A Tangled Web
The party reaches the end of the lair and learns that the king has passed through this way recently and was spirited away into the Underdark. The Horn of Veymar was taken west to Berdusk and Dorn and Kaldur were taken away to the new king’s dungeon on charges of conspiracy with Lynn to overthrow the crown.

35. Dread and Fury
Reif, with the help of several cohorts, finds and rescues the rest of the party that has been imprisoned by Volhym Mannen’krig in Berdusk; sadly it is too late for Lynn Kodhammer. They also uncover a sinister ritual to bring Balariax the Dread back from the grave.

36. Up The River
They party discovers that Lynn is not dead after all, but has been changed into a vampire by Salazzar. They fight goblin raiders on the river and dock in Scornubel.

37. The Jattelan Attack
The party trades away the Iron Flask to Rorin Watershed and are attacked by the Jattelan house guard on the docks. They fight them off and escape across the river; making their way to Blackhill Motte.

38. The Elderfeyne
The party sets out from Blackhill Motte with the aid of Lynn Kodhammer to save their liege lord from a wasting fire in his mind. They journey deep into the forest to find the Elderfeyne, the tree of life, that Woeden legends say possesses miraculous healing powers.

39. Purging the Corruption
The party purges the corruption from the High King’s barrow and returns with the roots of the Elderfeyne and restores Kole Ryttermarg’s sanity. After liberating the Village of Redwater they journey into the Sunset Mountains to find the Monastery of Ukisor.

40. Missionary? That’s My Favorite!
The party learns from mountain villagers that the siege of Darkhold has been broken by a combined force of Zhents and the rebellious houses of the north. The party fights alongside them to retake the town of Hluthvar before finding the entrance to Ukisor.

41. Battle in the Lower Halls
The party fights their way through the lower halls of the Fortress of Ukisor. They defeat the frost giant, Jarl Hoarfrost and his gnoll servants.

42. Vengeance of the Shadowhawks
The party makes their way to the upper halls and finds Lynn Kodhammer. They defeat Salazzar and free the Shadowhawk clan from his curse, recovering the Fang of Ukisor in the process.

43. Fang and Claw
The party defeats Ciraxis the White, Dracolich in Service to the Cult of the Dragon and rescues King Volhym from his prison within the halls of the monastery. They recover the Claw of Boareskyr and learn of the terrible fate of Iriaebor.

44. The Vale Unites
The party learns from refugees that Iriaebor is a hellscape infested with undead and many thousands of living remain trapped inside the city walls. They travel the realm uncovering newfound unity among the warring nobles, this new threat must be stopped at all cost.

45. The City of a Thousand Pyres
The party finds a hidden passage into the city and covertly makes it way through the undead choked streets toward the palace. They encounter Shilindria Jattelan as they approach the city center.

46. The Dread Palace
The party enters the palace through the dungeons and find king Liamund locked in one of the cells. They are ambushed by drow warriors that appear prepared for their arrival.

47. Triumph of the Vale
The party fights their way to the top, killing the wolflord Markuth Hilmaster. As they emerge on the topmost tower they find Volhym Mannen’krig conducting a ritual with the Horn of Veymar while his five Dracoliches circle overhead. He transforms before their eyes into a lich, Veymar Black, former lord of the Vale. His plan is nearly complete. He will sacrifice King Liamund and bind the Raiment of the Dragonking to him. Kaldur dives at him carrying the Fang and Claw, setting off a massive keg of black powder. Kaldur and the artifacts are no more. Veymar fights back against Dorn and Ian but in his weakened state they overcome his magical might and destroy him. The realm is saved!

Treason of the Vale TempestLOB

Treason of the Vale Comments

I'm sorry, but we no longer support this web browser. Please upgrade your browser or install Chrome or Firefox to enjoy the full functionality of this site.